An Entirely New Feature of a Thrilling Novel! Entitled, The Social War of the year 1900; or, The Conspirators and Lovers! 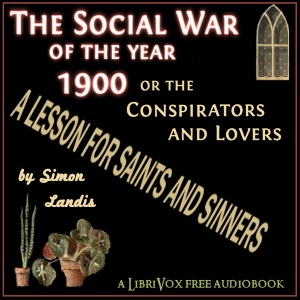 audio
An Entirely New Feature of a Thrilling Novel! Entitled, The Social War of the year 1900; or, The Conspirators and Lovers!

LibriVox recording of An Entirely New Feature of a Thrilling Novel! Entitled, The Social War of the year 1900; or, The Conspirators and Lovers! by Simon Landis.
Read in English by volunteer readers.

Described by io9.com contributor Jess Nevins as “the worst science fiction novel of the 19th century,” The Social War of 1900, or The Conspirators and Lovers! has become infamous for its overwrought prose, flimsy characterizations, ludicrous plotting, and repugnant ideas. For these same reasons, the book has gained infamy as a cultural oddity, a guilty pleasure, and a somewhat over-imaginative work of outsider art.

The Social War of 1900 follows the adventures of Dr. Victor Juno, a Naturalist who heals sickness through animal magnetism, and his sweetheart Lucinda. Juno, the leader of a secret paramilitary society, wages a revolutionary war against an American society steeped in sin and avarice—and, in particular, against a villainous triumvirate known as “The Bloody Conspirators.” But will his revolution succeed? And if so, what form will his idealized utopia finally take? - Summary by ChuckW

Uploaded by librivoxbooks on January 4, 2018